So we are still pretty thick then.

So we are still pretty thick then.

From The Times. UK.
Things we will never be clever enough to know.

Fascinating. I know it is beyond me to comprehend the nature of the universe. I bet my husband could do it 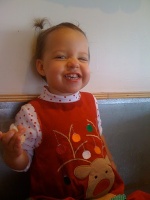 My son is working on a theory he has of how the universe works. He showed me his notes and briefly went over his theory, which from what I understand of quantum physics, sound pretty interesting. He looking for someone to work with him on the math.

He kind of blew me away with it. So he may argue with Lord Rees. Wouldn't it be a hoot if my son came up with a valid theory?

That would be great Alli.....I wish him luck.
I dont get the quantum physics at all.
"The secret" was a challenge for me.
I think I was not in the line the day God gave out math ability.

on the other hand

pen wrote:That would be great Alli.....I wish him luck.
I dont get the quantum physics at all.
"The secret" was a challenge for me.
I think I was not in the line the day God gave out math ability.

I think math has a lot to do with the presentation. Perhaps you were mislead as a child and that concept of your math ability held on.

As a young child I heard, from teachers, that girls are not any good at math, so "don't even try". I believed them and did not put much effort into math. Many, many years later I went to college. I didn't go into school with any preconceived ideas about my abilities - in any subject.

It turned out that not only do I understand math, I am outstanding. It really was a shock - a pleasant shock this time. It's not that I'm particularly smart. I was just mislead as a child and had wonderful math teachers in college. I think math is not that hard for folks of average intelligence to grasp. And those folks who have above average intelligence, which I'm sure you have, should not have the problems with it that they do.

I'm not talking about theoretical, out there math that 10 people on the planet understand. I talking about arithmetic, algebra, trigonometry (my favorite), geometry, calculus, basic statistics. I have every confidence that everyone on Ronda's can master these topics. Some have probably already done so. That is, when we're not stupefied by our meds or in the throes of a migraine!

are we talking measurement theory and the atom?

There was a brilliant programme about it last week. . Shrodinger's cat and all that. I can't get the link to work.

Oh yeah.. when I have a migraine, I can't talk physics with my son. It is one of our favorite things to do. Get in these long rambling discussions about Quantum Theory, space, and what brings us all together in this ginormous universe. But when I have a migraine, everything I've learned, read or thought about just gets lost. It's so frustrating.

His theory is about the fabric of space below the level of quarks. It's pretty compelling. I hope he can find someone to work the math with him. Was the programme on BBC? I might be able to find it on their website.

I really enjoy the programs on astronomy, astrophysics, geology and anthropology. It makes me stretch my brain out. But at the same time when the experts with the double PhD's can't agree with each other I end up questioning both of them.

Then they boast their theory and try to put it across as fact when it has not been proven. Or worse yet sometimes they all will agree on something as proven fact only to find out years later they were all wrong.

There are many interesting topics that are not quite politically correct that nobody will touch or at least make into a program. I can only wonder who is suppressing the info.

Some of these are:

The data that seems to indicate the sun-moon alignment and oceanic tides can trigger earthquakes.

The 9,000 year old Caucasian skeleton that was found here in WA State. And then quickly claimed by the local indian tribe and hidden from any further testing.

If oil is a fossil fuel then how are they pumping it from thousands of feet under the layer that even the first primitive plant fossils are found?

The possibility that comets are not frozen dirty snow balls but solid rock.

The scientists that have found some compelling evidence get labeled maverick, loose canons etc. They get no public or private funding and pretty much blackballed out of "the loop".

Yet history tells us it's the mavericks and loose cannons that have made most of the most profound discoveries.

Jim Berklund has been studying the ocean tide and earthquake evidence for over 20 years. But the geologists have black balled him and labeled him as a freak. They even informed the news media that if they give him any coverage they will boycott them.

Chris,
Possibly I was never any good at Math because it doesnt interest me, I dont like it, and have never missed it at any time during my adult life. To be honest it makes my head hurt just thinking about it. Mostly I would rather watch paint dry....less painful.

I was fine at Arithmetic though. Amazed myself at age 11 when I got 100% in a test.
They dont usually do 10%, but I had dropped math (algebra and geometry- girls school and she wanted to encourage me.)

Here is another link to the same article reference.
http://www.dailymail.co.uk/sciencetech/article-1286257/Limitations-human-brain-mean-understand-secrets-universe.html?ito=feeds-newsxml

alli wrote:His theory is about the fabric of space below the level of quarks. It's pretty compelling. I hope he can find someone to work the math with him. Was the programme on BBC? I might be able to find it on their website.

Hope they are good.

Hope these all help.

pen wrote:Chris,
Possibly I was never any good at Math because it doesnt interest me, I dont like it, and have never missed it at any time during my adult life. To be honest it makes my head hurt just thinking about it. Mostly I would rather watch paint dry....less painful.

That's that then. You don't like it. Fair enough.

He got that from somewhere and I don't think it was all from his dad.

See Chris, I have a theory, that the intelligence skipped a generation.
So I sort of incubated it and it came out in him.
It was a one off, his sisters are normal thank God

But hey he is also 6ft 5 in and a brilliant musician with perfect pitch.
No one said life was fair did they???

BTW his dad digs math, but he cant sing or act....

Brent wrote:The 9,000 year old Caucasian skeleton that was found here in WA State. And then quickly claimed by the local indian tribe and hidden from any further testing.

Are you talking about Kennewick Man? There's been a lot of research done on him, but you're thinking about the big controversy with various Native American tribes trying to claim his skeleton based on land and religious affiliations. It all falls under NAGPRA (Native American Grave Protection and Repatriation Act) that tries to ensure that Native graves aren't unduly desecrated and their religious artifacts aren't effectively stolen. NAGPRA has limited some of the research that can be conducted on him - the more invasive tests, like DNA testing, have generally been denied because it could be considered potentially destructive - but there has been a lot of measuring, weighing, comparative analyses, etc.

The latest round of research proposes that he wasn't actually, biometrically Caucasian, but probably more similar to South Asian cultures...but it's pretty difficult to assign a cut and dry "he's this and this" because of the wide skeletal variations among early American populations. Even though TV makes it look easy, biological race can be very difficult to assign to some skeletons, if nothing because there was so much blending that certain red flag features become diluted or disappear. It's most definitely a fascinating case that probably won't get an effective resolution any time soon, even though only one tribe is still trying to lay claim to the skeleton. He's technically owned by the US Army Corps of Engineers currently and is housed in a museum, at the University of Washington. I don't think he's on display, though, but I could be wrong.

Uhmmmm.......sorry. I was an bioarchaeology major in college, I love this stuff a little too much.

I could talk about it all day and I would give my eyeteeth to have my hands on those bones! (Sorry, was that weird?

So did anyone follow the links I posted? Took a while but they were lurking on Radio 4.
Be interesting to see what you made of them.

Haven't scientists for a long time been predicting that they were about to the edge of knowledge? That it wasn't going to be possible to learn much more? I could be wrong, since I'm much more of a math/English person than science person. I used to laugh while i was still getting a second major in math at my undergrad that the school actually classified math as being one of the science majors! So even though I've never liked science, I'd be majoring in it! But actually, I've come to enjoy science a lot more since I've had to research migraines for myself. I think it's just that my teachers tended to teach science as rote and not as interesting information. I even remembering studying for junior high science tests by memorizing my notes, word for word, since they were all copied from what the teacher had written on the board for us to know! That's not the way to enjoy a subject!