Help! we are being attacked by wild animals!

First something took tenancy under our roof area (forgot the word - migrainity moment!) and made a lot of noise.
Hubby had to climb up there, make sure whathever it is is currently gone and patch up any holes and openings that are visible to the naked eye. so-fa-so-good, no more noise. uffff-a.

Then, they (hubby and kid) but not me (that's when being deaf comes handy

) were being waken up early morning by noisy and piercing trrrrrrrrrrrrrrrrrrrrr
- the spotted kind of woodpecker bombarded our house side wall.
there was nothing for the humans left to do but stay in bed and groan and silently curse and pray for it to stop, lol.
I slept soundly (no pun intended) undisturbed, oblivious to the whole thing...

Then the squirrels tried to steal our patio stuff!
We have this old futton with the mattress stuffed with cotton like material, and laying on it rectangular pillows from some other old set, also stuffed with fake cotton,
the whole thing was covered with an extra large plastic tablecloth with cotton underside to protect it all from rain and the dogs.

The sneaky squirrels discovered that the tablecloth's cottony underside is evidently an excellent material for them to use - probably for a nest, and have started chomping holes in it. Before we realized what's happening the sneaks discovered that the stuffing in the rectangular pillows is even better, softer lining! for their little ones!
so now we have a nasty hole in one of the pillows, too. and a smaller ones in the other.

But the climax happened when the hubby unexpectedly stood face to face with the squirrels brazenly trying to steal the whole table cloth.
He was in the room, inside, and the squirrels on the patio outside (the pation is tad lower than our family room and just by the windows).
One squirrel grabbed the cloth with her teeth from one side the other from the other and voila! they proceeded to drag it out from our patio, lolol
Hubby started to thump the window energetically, but the squirrels barely reacted.
they just stopped, looked him squarely in the eye and proceeded again. it wasn't until hubby started doing a lot of ruckus when they finally unhurriedly let go of the cloth.

I know it's not funny having the animals taking over your living area, but, Risa, you tell it so expertly. I'm laughing picturing those squirrels blatantly ignoring your husband and taking what they please. So funny!

I tell you, Becky, sometimes I swear as soon as we turn our back they flip us a finger and when we look up they look up back stonily "yeah??"

My daughter wanted to go to bed while I was writting yesterday, so I finished rather abruptly and forgot to add that the squirrels made holes in the futton mattres, too.
We have covered everything now with a big piece of plastic without any lining and so far so good.

But I had another animal adventure, this time with our own dogs.

Well I was home alone, headachey, got up late, haven't had a shower, and let the dogs out.
When you don't have a shower you can bet your patootie at one point you'll have to run in your bathrobe all messy and stinky outside.

So, after a long while I remembered to let the dogs in and that's then I found out one od the dogs is missing.
I started frantically call his name but he still didn't come back, instead I heard high barking and yipping of other dogs, and since this my dog is fear aggressive I was terrified of what might have happened.

Suddenly I saw a dark something looming in the corner by the fence and thought it's my dog trying to jump over but couldn't. Instead it was my lady neighbour saying my dog dig a hole under the fence and got into her backyard but just in such way he could get in but not back into his own, lol silly boy.
I could see his sheepish, desperate face peeping out the hole looking at me with eyes pleading to do something. (The dog's, of course, not neighbour's).

Luckily she didn't have any dogs but the neighbour on the side did and it was their dogs doing all the ruckus that scared me so bad.
Of course I had to be in my backyard in the freezing cold in my bathrobe, all messy, hair greasy and sticking out like I put my fingers in an electric outlet, stinky from not being washed - a skunk in one word,
and how apt may I add - after all it was a backyard, eh?


Well I managed to sputter "I have a migraine" and excuse my appearance this late (it was past four in the afternoon),
and she graciously offered to bring Kuba home, which she did.
And Kuba was all smiles and million tails wagging and as many jumps home - so happy from his big adventure and being safe home

As soon as hubby came back from work we fixed the hole under the fence extremely well!

My dogs have done similar things to me. And it's always on the coldest day.

My cocker spaniel, Dolly, likes to play the princess in distress. I've had to go out and rescue her in similar attire (and hair, etc.). Of course, it's always when traffic is heavier than usual on our road (we live outside of town). I can imagine what they're thinking as they drive by.

Thanks for the chuckle Risa. Lol. It is some sort of law that we look our worst and think " oh who cares, who's gonna see me" THATS when the doorbell will ring or the dogs will dart into the street or your kid will open the door and walk in w 3 people... Lol. It almost never fails.
Jessica 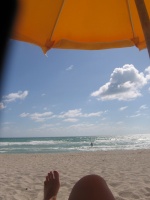 Oh most definitely, it's Murphy's Law- the worse we look the further we go and the longer we stay out.
And the more people we'll see us. Especially the ones we want to make good impression on

Here's my adventurous dog Kuba:
[You must be registered and logged in to see this image.]

And is that sweet cute doggie in the avatar Dolly?

Kuba looks like such a sweetheart. Is he/she a border collie?

I tried uploading Dolly's picture but couldn't get it to work, so I'll have to work some more on it. She's very much a character for pictures.

I think my avatar is a cavalier king charles spaniel, which is very similar to a cocker spaniel. Closest I could find. I'm a sucker for those puppy dog eyes and long ears.

Dolly's sitting next to my as I write this begging for some saltines (I've been nibbling on them because of my migraine). She can make the most pitiful faces and sounds when she's begging--you'd think she was neglected and starving (she's far from it).

I can't have a dog, due to my cat, who thinks she is the queen of Siam, and curses me in Siamese if I say the word "dog"...

Seriously, she goes up on her tower and will not come down, not for any "bodily" reason....

I would love to have a companion dog...

ps. I would post a picture but I don't know how...

Both of my dogs are Australian Shepherds, except Kuba didn't had his tail docked.
Here's Bella:

[You must be registered and logged in to see this image.]

And Dolly does look like she could whine away your last piece of food on earth, lol.

Holly if you want to post an image you need an URL first - so again first you need an image hosting website such as Photobucket, Flickr, Snapfish etc,
and then all you have to do is click on the image icon in the bar above, paste the URL in there, click OK and presto!
you posted your image here!

Here is Mo (aka Moomin)
[img][You must be registered and logged in to see this image.][/img]

Amy, Bo is beautiful too. Is she/he a spaniel?

And Risa, I love both Bella and Kuba. My last beloved dog was an australian shepherd/cocker spaniel cross. Australian shepherds are so smart and intuitive. I pretty much LOVE all dogs, however. If my husband weren't here to keep it in check, I'd probably have a house full of dogs.

Holly, I know exactly how your kitty is acting. My youngest son has two cats, and Smokey, the male, is like that. He rules the roost and has such a personality. He's not a siamese (not sure what he is), but he definitely has an attitude. When David comes home from work after being gone all day, Smokey meows at him incessantly chewing him out for being gone. It's quite something to watch.

I don't know what we'd do without our pets. They definitely make life better.

Mo is 1/4 Cocker Spaniel, 1/2 English Springer Spaniel and 1/4 Whippet - I've named her breed a Sprocket or a Whinger!!

Thought I recognized those eyes and curly chest hair. Dolly has freckles on her nose like Mo too.

We had a springer spaniel several years ago too (Licorice). Some friends were moving and couldn't take her along so we gave her a home. She was black and white like Mo, but had short hair. She was a very active and loving dog.

Shiela needs to know about this, especially the squirrels part?

Shiela needs to know about this, especially the squirrels part?