Tired and in pain

Tired and in pain

The daily pain has come back. It's not awful on a daily basis, but there are some awful days mixed in. My indocin and bedrest are commonplace again.

November and December were wonderful. Late December and Early January I started getting into a regular daily pain pattern, mid January confirmed it, and now late January I am tired of fighting it and have resumed daily naps. The pain zaps my energy. I'm back to taking daily additional pain meds.

It was nice while it lasted.

Maybe I have built up a tolerance to my daily pain meds. I really don't want to take a higher dose of that. I put a call in to my neuro a few days ago asking to get the approval process started on botox, and their response was that we will address it during my next office visit in early February. That disappointed me because I had hoped to have it all lined up to get the treatment during that appointment. Now it will have to be a long drawn out process---waiting longer to get the botox.

To top it all off I'm trying to coordinate an office visit with a new neurosurgeon. I'm playing games with insurance companies, referral departments, and doctor's offices, trying to figure out who refers me, who sends records, etc. My old neurosurgeon is moving out of state, so I need a new one who can make adjustments on my shunt as needed. I need this all lined up before the old doctor leaves so the new one can talk to the old one if need be. Time is running out on that front, too.

Blah, blah, blah. I just want to sleep. Head hurts and it's time for dinner.

Feel so bad for you. I have been the same way. Just started on a steroid 2 days ago. And finally today it is working. But I know from past experience it will be short lived. If I can get a week to a week and a half out of it, I can get some things done around the house.

Hope you feel better soon, it's no fun! 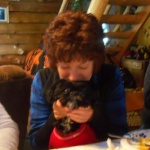 Late December is when I started running in to more problems than normal. But, our weather has been CRAZY.

Its tough coordinating things with insurance. I'm supposed to be doing it for Robert right now but my head has been hurting and I keep putting it off.

I hope you feel better.

I am really sorry to read that your 'good pattern' has faded into the yucky commonplace pains of days old.

I know that feeling...we go through good stretches of time, think we might have things under control, life is better, our time with our family and children is better.........and then WHAM!!!!!!! We get brought back down to reality that we are not in control of our pain.

I am sorry that yoru Dr's offices are not working faster and in harmony to get you the Botox and other appts. in a more timely fashion........that adds to the pain and anxiety.

For quite a while now I have been managing really well. The past two weeks have been so bad though. It makes me wonder how I used to do this everyday! I really think it has something to do with the weather in my area. I waited for years to be able to have botox. I put it out of my mind for a while because it is not affordable. I was thankful to my DR. I mentioned that I had Medicare and she told me they cover the botox. My regular insurance didn't at the time, and now I need to see if they do since FDA approval, but they do cover the surgeon fee. I so hate dealing with Ins companies and Dr offices, and billing 'specialists'. It is always a run-around pain in my butt!! Good Luck!

I know how you feel. I was doing great April through October, even though I went through a stressful move and remodeling work on top of full time job. But things have been going downhill the past few months with many more B days (headache 2-4 on the pain scale). I am having to lie down again today as neck and back pain are kicking up again. I really can't afford to go back to 50% capacity due to headaches again.

I'm still trying to get my supplement levels sorted out as I ended up without any on a trip a few weeks ago. So that could be contributing. I did get a full checkup from a new PCP last week. He found evidence that I may be low thyroid, even though I am taking the iodide supplement, so we are going to get that checked further. Low thyroid has been linked to migraine problems. If you have not had yours checked lately you might look into it. I'll let you know if that avenue pans out.